The problem (I'm already discovering) with keeping a journal and a blog is that the temptation is to do stream of consciousness in the blog, while writing more organized stuff in the journal. Something happened last night, which is the subject of the April 2 entry for the journal. However, that entry also talks about the puppies, so I can't post the news that the puppies are probably going to leave tomorrow until the April 3 entry (also already written!).

See--that's my big secret. Sometimes the journal entries are written a day or two ahead of time and then when "news" happens, it's tricky trying to decide in which order to publish them. But I think of the journal as my "diary" and I keep copies of it on disk, so the history of my life (for anybody interested) will be there, in order. Thus, sometimes I end up in a situation like this.

Anybody who takes the time to click in on the blog as well as the journal will learn here that tomorrow the puppies will be picked up at 11 a.m. Those who only read the journal won't find that out until the day after tomorrow. Now aren't you glad that you checked the blog too?

I'm feeling a little better than I was when I first learned they would be leaving (and when I first wrote the April 3 entry). There have been a lot of tears around here this afternoon. These guys are going to be so much more difficult to give up.
Posted by Bev Sykes at 5:07 PM No comments:

Finally! I've read the hype about the movie Closer, which every critic I've read seems to think is some monumental cinematic miracle. I don't get it. We saw the move--four of us--and thought it was the biggest piece of crap we'd seen. So when I read the reviews afterwards, I began to doubt my abilities as a critic.

But now along comes a review in The New Republic, which begins the way I would like to have written the review:

"Flawlessly lucid"; "viciously insightful"; "quietly devastating"; "emotionally honest and psychologically dense"; "dares speak the truth about modern adult relationships." Those are a few of the phrases that were used to describe the movie Closer when it arrived in theaters late last year. Oddly, as best as I can tell, the following terms were absent from discussion of the film: "ridiculous"; "unmoored from reality"; "emotionally preposterous"; "unintentionally hilarious."

I kind of feel it's like The Emperor's New Clothes, with all the reporters praising this piece of crap to the skies and only one having the courage to call it what it really is:

[Closer] is not a bad movie--or rather it is not merely bad. It's flamboyantly bad, bad in a way that can't help but be fascinating and even entertaining. It's well-enough executed, boasting a couple of good performances and one great one, and it's pleasant to look at. But it's also aggressively, irretrievably silly, a potty-mouthed fantasy that somehow mistakes itself for a fearless excavation of the dark recesses of the human soul, American Pie as reimagined by Neil LaBute.

What a glorious day it is outside. The sun is shining, it is warm, but not hot. There is a lovely breeze blowing. I sat under the apple tree and watched the bees and butterflies flitting about from blossom to blossom while the puppies played at my feet.

Even the dogs seemed to appreciate this beautiful spring day. Sheila and Kimba spent the morning just lying out in the sun, which they almost never do. And when I put the puppies down, they skooted along on their stomaches, noses buried in the grass, learning all there was to learn about this new environment. They even followed me back in the house when I called them, so I didn't have to pick them up and bring them in.

Now everyone has gone back to sleep after their brief sprint in the sun and I'm back in my hole of an office getting ready to work again. It's too bad that weather like this is so fleeting. Soon it will be too hot again, the blossoms (and the butterflies) will be gone--and so will the puppies. 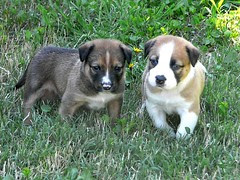 I get involved in a PhotoShop project and I just can't stop until it's finished. I worked on a photo all morning today--it will be the "photo of the day" on Funny the World for April 1. I love it. It's so much fun. It took lots of manipulation, but every time I get involved in a project like this, I realize how much I've learned since I first installed this program 2 years ago.
Posted by Bev Sykes at 11:56 AM No comments:

Those reality shows bring out the best and worst of everyone. "The Amazing Race" is definitely bringing out the worst of Survivor contestants Rob and Amber. Tonight they were the only couple remaining in the race who did not even slow down to ask if the team standing by the overturned vehicle, with the cameraman on the ground, was OK.

The retired couple won't last till the end, but I'm sure impressed with them. I would have been eliminated the first day. Don't know who I'm hoping will win, but I'll be happy with anybody that's not Rob and Amber.

From the news today: "Boy Scouts of America’s National Director of Programs Douglas B. Smith will appear in a Dallas courtroom tomorrow to face charges of distributing child pornography, according to reports by NBC News...At one point, Smith served as Chairman of the Scout’s Youth Protection Task Force, according to a website operated by the Western Alaska Council of the Boy Scouts of America...In addition, Smith was one of 42 recipients of a Distinguished Service Award, presented to “Arrowmen who have rendered distinguished and outstanding service to the Order on a sectional, area, regional, or national basis. It is given primarily for dedicated service to the Order and Scouting over a period of years.”

I wonder if this outstanding example of Boy Scout leadership is a friend to the other leader who was recently arrested as a serial killer.

Well, at least these guys aren't gay. We sure as heck wouldn't want to give a bad example for the boys under their care.
Posted by Bev Sykes at 1:59 PM 1 comment:

I don't suppose it would strike any of the protesters outside Terri Schiavo's hospice odd that the Bible says that a woman is subject to her husband, that she leave her family and stay with her husband. All those people who feel that the husband should have no say in her condition. Those are the same people who feel that Leviticus 18, which says for a man to lie with another man is an abomination, but ignore the rule that eating pork is also an abomination or that a disobedient child should be killed, or what price is fair for the sale of a slave.

Sometimes the illogic of Bible believers just boggles my mind.

I wish that I had that kind of blind, convenient faith, based on convenient choices from a book written 2000 years ago, but I'm left with taking what I read and deciding what is right for my life, realizing that laws written 2000 years ago were designed for life 2000 years ago and did not take into account advances in science and advancement of civilization in the subsequent years. Heck, they never even envisioned polyester, which, while an abomination in this day and age, is certainly not reason for putting its wearer to death, as it would have been 2000 years ago.
Posted by Bev Sykes at 7:05 AM No comments:

I've heard a lot of good one-liners about the incident of the woman who bit into a piece of a finger while eating her Wendy's chili, but the best one was one that Walt sent me this morning, saying someone speculates that they've finally found Jimmy Hoffa.

They say Wendy's business is down. No shit! I suspect it will be a long time before anybody orders chili there, even though the chance of finding fingers in future chili batches is slight.

Best quote from a Wendy's exec was "this is the first time we've ever found any body parts in any of our chili." Well, gee--I feel so much better now!

I try not to think about the experience of taking a big bite of chili and biting into someone's finger, but it does terrible things to my stomach, so I don't.

But it is good fodder for humor.
Posted by Bev Sykes at 8:21 PM 2 comments:

You could go sublime or ridiculous or both for Easter. Ted Turner Classics started off the day with Easter Parade, with Judy Garland and Fred Astaire. Watching it on TV was kind of silly, since I just bought the beautifully restored new DVD, but old habits die hard and as a Garland fanatic, I couldn't not watch it.

Then, when it ended, the next movie was King of Kings. I didn't watch that nearly as closely as I had Easter Parade, which probably says a lot about me, and is why God is indeed going to smite me. 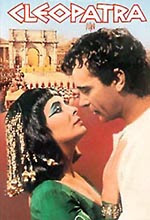 But the previous morning, I turned on Cleopatra, the Elizabeth Taylor/Richard Burton spectacle that I'd heard about for years but had never seen. I decided this was a 3-hour long fashion show for Taylor. One overblown outfit after another, sometimes in mid-conversation (designed, I guess, to indicate the same conversation took place over and over again over a period of time). I realized that I was starting to snicker at what was supposed to be serious historical work (though did anybody other than the people involved ever think of this as "serious" at all?). I finally admitted the whole thing was a monumental waste of time as the armada (or whatever it was) was being defeated, the ships are in flames, and Cleopatra's barge turns away, leaving them all, thinking that Mark Anthony is dead, while Mark Anthony is actually cowering in a boat whimpering that Cleopatra is leaving him and instructing his rowers to catch up with her barge, though they point out to him that his men are dying in the ships he is leaving behind.

God will smite me

Well, Steve set up a blog to complement his journal, so why not me? There are times when I get half ideas that I try to put into full blown journal entries, so maybe I'll try blogging them instead.

Yesterday was Easter and I was watching "King of Kings," that overblown Biblical epic. Several very irreverent thoughts came to me as I listened to the dialogue:

[1] If Jesus always traveled around with a heavenly choir in the background, how could anybody doubt his divinity?

[2] Thinking about the Marriage Feast at Canaan, where his mom says "they have no wine" and he responds, "My hour has not yet come," and then he goes ahead and does the magic trick anyway, makes me think of Jesus as the Clark Kent of the Bible.

[3] The Bible tells us that Jesus told Peter, "You are Peter, and upon this rock I will build my church." Uh...Jesus was a nice Jewish boy; "churches" had not yet been invented, so where did the term come from, and how did it become relevant?