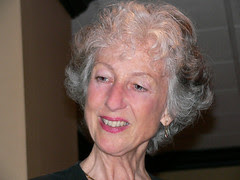 Laura
Originally uploaded by basykes.
I used to work for her in a secretarial service. She's an interesting lady, who now owns an apple orchard and runs a fruit stand. She excelled in business in the pre-computer era, but did not handle modern technology all that well. I hadn't seen her in about 15 years. She still doesn't understand modern technology.

At one point this weekend she learned I had an on-line journal and couldn't quite understand how I could write things that anybody in the world could read. Someone else tried to explain that all you had to do was "google" my name and the site would come up.

I recognized that telling someone who barely knows what a computer is to "google" anything to find a "site" is like suggesting a Mountain Gorilla take a shopping cart and buy a bunch of bananas at the local Safeway.

That seemed to make more sense.

"I always wondered what happened to the piece of paper," she said.

As I said, she's a neat lady, but technology is not her friend.
Posted by Bev Sykes at 5:39 PM 1 comment:

We are midway through the heat wave here, with temps having been in the 100s for about a week (6 days, I think) and predicted to be within 2 or 3 degrees of 100, if not over 100, up until the time I fly off to Washington on Thursday.

So what happens today?

The neighbor comes to tell me that our a/c fan is not working, which explains to me why it didn't seem to be cooling off the house all that efficiently yesterday.

I've left a message for the a/c guys and it's now just a question of whether they can get here tomorrow or not. In the meantime, I'm doing a lot of sweating and no wonder the puppies are so grumpy.
Posted by Bev Sykes at 11:41 AM No comments:

A sight to behold

A young Hispanic guy rang my doorbell this afternoon. I was expecting Ashley, from the SPCA, who was going to bring me more puppy formula, so I went to the door, even though I was in the middle of feeding Weasley. I wonder what this guy thought. Here's this fat lady in shorts and t-shirt (no bra) standing there with fly-away hair (I don't think I brushed my hair this morning) with sweat dripping down her face ('cause it's 102 outside). In the yard Sheila is barking her head off, Kimba ran out to greet the guy, who backed down the driveway, afraid she'd attack him. I have this fat, squirmy puppy over my arm and behind me two more puppies are yapping.
I don't think I want to think about what the total picture must have been. The term "trailer trash" does come to mind!!! (All I needed was a cigarette hanging out my mouth and a beer in the other hand!)
Posted by Bev Sykes at 5:38 PM No comments:

I recently reviewed a production of "The King and I," a show which I gave a very good review, save for some constructive criticism about the need for make-up for two of the Siamese women. Today appeared a scathing review of my review, with follow-up note by my editor:

I take issue with BevSykes' review of the Davis Musical Theatre Company's production of "The King and I." To publicly single out any actor for not looking the part, only because of the color of skin and hair one happens to be born with, is offensive, unprofessional, and cruel.
Regarding Chelsea Betty (Tuptim) in her Siamese headgear, she states, "...made her look like Malibu Barbie on the way to a Halloween party." She compares Jennifer Bonomo (Ladn Thiang) to "...a woman who looks like my aunt Barb" only because they are Caucasian actors with Caucasian features. Apparently I "look the part," according to Ms. Sykes, meaning "Siamese or Burmese." I am of Mexican and Filipino heritage; so much for "authenticity."
As an actor of color, I would find it intolerable had my fellow Caucasian actors stopped to Ms. Sykes' vision of "make-up magic" to fit the part, especially in this day and age in DAvis, a bastion of tolerance and diversity. Why insult the intelligence of our audience? Director Steve Isaacson and the actors chose to rely on their talent and skill in their portrayals.
Ms. Sykes must have taken a potty break during the ironic "Western People Funny" number as the King's Siamese wives hobble around in clown-white makeup and "swollen skirts," bemoaning th3e futility of trying to look like a European lady. Duh!
Would Ms. Sykes have made a similar comment had the role of Anna Leonowens been played by an actor of color? Had Ms. Beatty chosen to "look the part," I sense Ms. Sykes' comments would have compared her to a Malibu Barbie dipped in a vat of caramel.
Having the honor and privilege of working alongside Ms. Beatty, Ms. Bonomo and all my other talented cast members, I can attest that the power of their performances transcends their skin color and inspires me to be a King of "commanding presence." Ms. Sykes' backwoods comments will only strengthen and solidify our remaining performances.
Juan Ramos (King Mongut)
Enterprise editor Derrick Bang replies:
Juan Ramos seriously overstates the degree to which Bev Sykes commented on the issue of color-blind casing, and he glosses over her key point: The issue is not (obviously) merely racial characteristics, but credibility and verisimilitude. Absent some effort to make an actor look or sound appropriate for a part which--as written--demans cultural specificity, the audience is, let's face it, robbed of a critical story element.
Ramos' precise heritage is inconsequential; what matters is that in this DMTC production he "sells" his part--which, if he's gifted enough, he could do were he purple with pink spots--and hence his King Mongut can be considered a successful portrayal. Alas, Bev could not say the same of other cast members.
Dismissing the potential advantage of makeup is disingenuous; why else would so many Broadway shows spend so much on this craft? I had no trouble with the African-American actor who played Schroeder in the 1999 Broadway revival of "You're a Good Man, Charlie Brown"...but the Asian actor who played Linus left me flat. The former "caught" the character, the latter did not.
And "catching the character" certainly is within Bev's critical purview here at The Enterprise, as is exploring possible reasons for any failure to do so.
Posted by Bev Sykes at 6:29 PM 1 comment:

I don't know that I will ever adjust to hot weather. I guess after 30+ years of living in Davis and not adjusting yet, I'm not likely to. Last week was really rather nice -- mid-to-high 80s. But it has suddenly turned hot and surprisingly humid (my saving grace has always been that valley heat is a "dry heat"). I sit here with the air conditioning on in the house, a fan on my face, and my fingers on the keyboard are sweating. By the time I finish making dinner, sweat is pouring down my face and into my eyes and it takes a good half hour of doing nothing but sitting in a chair before I finish sweating.

I really have no cause to complain. So far it's been a pretty pleasant summer and it's half over... but the hottest part of the year is coming up. I look forward to fall. "Cold" is such a nice feeling.
Posted by Bev Sykes at 12:35 PM No comments:

These are the ingredients for Paula Deen's latest recipe for mashed potatoes:

How can you not love a woman like that? 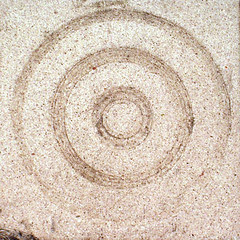 CIMG4414
Originally uploaded by basykes.
I am obsessed with Squircles. Squircles are "squared circles." Find something circular, take a picture of it, and crop it into a square shape, and then post to the "squared circle" pool on Flickr. I'm always looking for circles to square wherever I am and found a wealth of them while in Santa Barbara.

The picture here is a piece of the linoleum at Albertson's. I was standing there waiting for them to finish decorating Tom's birthday cake and when I looked down, I saw circles. I had my little camera with me and next thing you know, I was set up to create a squircle.
Posted by Bev Sykes at 8:55 AM No comments:

Have you noticed the sneaky thing that television networks are doing lately? I don't know if it's deliberate, but the suspicious part of me assumes that it is. You're watching a program and the sound is at a comfortable level and then commercial break comes and the sound goes through the roof, at ear-piercing level. You either turn it down or mute the TV and then when the show comes back on, you have to turn the sound up.

I can only assume that either the networks or the advertisers have figured out a way of making us look at the commercials, because if we can't exactly ignore them, since they are so damn loud.

That combined with the popups at the bottom of the screen that cover up the action on the screen in order to get you to watch an upcoming program.

What happened to the good old days when you just sat down and watched TV and didn't have to actually think about anything.

I suppose this goes along with the half hour of back-to-back commercials that you have to sit through in order to watch a movie. It's all well and good for theatres to advertise the real start time of movies, but if it's a popular movie, you have to get there for the commercials anyway if you want a decent seat.