I give up. Technology wins.

What the hell is Port 80 and why do I need to care?

The nice thing about Windows XP is it keeps you constantly upgraded with all those lovely “protection” things it says are going to protect you from Internet evils (not unlike the federal government--we just give it free access and it does what it thinks is best for us).

One of those upgrades happened last night. When I woke up, the computer had shut down and I had to reboot. When I re-booted, it told me that it had done magical things to my computer while I slept. I felt safe and secure.

Until I attempted to boot up FrontPage, the program that I use to design journal entry pages.

I use FrontPage 98, which is a very old version of the program (the latest version is 2003) because it works for me and upgrades cost money. For what I do, there has been no point in upgrading all these years. I only need the very basics and what you’re paying is for all the fancy stuff I’ll never use. But now FrontPage 98 had become my enemy.

When I attempted to start the program, I got the message, “FrontPage personal web server is not able to use port 80. There may be another web server running." This same thing happened two days ago and I was somehow able to get it all started again, but don't remember what I did.

I tried doing a system restore back to a day when it all worked, but that didn't help. I got out my FrontPage 98 for dummies and found absolutely no reference to this message whatsoever. I sent out pleas to people I know who use FrontPage, but they all use later versions and couldn’t help me.

“Port 80 is the default port that FrontPage looks for on the Personal Web Server. If the web server is not installed correctly, or if the FrontPage extensions have not been installed and configured correctly onto the Personal Web Server, you'll get this incredibly maddening message stating that FrontPage cannot run because it cannot find Port 80. Forget about finding any resolution to this problem in any FrontPage manual; I've never seen anything in print that would be of any use in resolving this common glitch.” 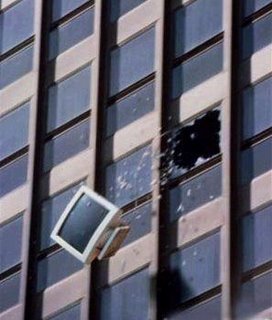 Well. Gee. Thanks. It appears that I am, officially, up shit creek.

I don’t know if I can get FrontPage working again, or if I need to upgrade to FrontPage 2003 in order to get it going. But I am very definitely dead in the water.

I could save big bucks by ending my Yahoo account, but that would end the archives and I just paid to renew my domain name, so the monthly expense wouldn’t actually end for a year yet. Updating to Blogger also solves the guestbook problem too, since now I have a working guestbook which cuts off whatever pearls of wisdom are posted beyond 250 characters. It also now makes the journal an rss feed, and may end the need for the daily reminders, though I will still send those out for my mother, who can’t find my journal any other way.

In a way, this feels like a little death, but in another way, it will be easier. No more wondering how to change the look of the page each month, no more coming up with ideas for new title designs, just type it all in Blogger and be done with it.

It’s amazing how much time I have spent in the past week trying to “fix” the things that all the “new and improved” software is supposed to make life easier for me, like the QuickTime mess, which is better, but still not back to where it was.

I’m sure that once I have adapted to the new blogger format and once readers have gotten used to coming here instead of to “funnytheworld.com” (which will still have a pointer to the new site), I’ll like it. But for the moment, it feels like a very sad day.

However, I just did realize one fun thing about using Blogger instead of Funny the World. I realized that as I drive down to Santa Barbara next week, I can stop along the way and leave audio messages. When I’m traveling with Nora, I can have her leave a message on the blog. This might turn out to be fun after all. Maybe I should just look on the bright side and not worry about the negatives.

The thing that worries me is that right now some 350-400 of you read my journal every day; 20 read my blog. I’m hoping that everyone will make the switch to Blogger and that I don’t lose too many in the transition.

LATER: Hope may yet exist. A friend, who shall remain nameless, to protect the guilty, says there exists a later version of FrontPage which is mine for the asking, but it will be awhile before it can be sent thru the mail. I will keep this blog at least thru the end of October, due to being gone for the better part of two weeks. But perhaps in November I can start back on Funny the World again. Hold the good thought.

Actually, input from readers would be nice too as to whether this works for you or whether you like the old format better. Now that I have a good guestbook, you can fully express your feelings!

O Bev!
I'm so sorry... I hope that it works out for you (and all of us readers!)
I am beginning to not mind format changes, though... it's all about the words, the words.

Did you know that you can post your entries in blogger, but they can still be displayed on your own webpage. Login to to blogger, go the settings tab on your blog setup and enter the details of your server eg. ftp.funnytheworld.com and the other details. Then when you publish, it looks exactly like your blog page, but instead appears on your www.funnytheworld.com website instead of blogger.

I can feel your frustration...you worked hard all those years on your web site. I would be upset too.

One thing for sure, you're not losing me as one of those readers. I'm one of your fans who reads both of your sites almost everyday.

I don't understand the problem.

I've been using blogger for, oh, weeks now and haven't had a single problem.

But I do understand how much we love change!!!

Hello
We are professional traders, earning on forex and binary for investors weekly, will love to tell you all more about our investment platform where you can invest funds as little as $200 and start earning $2500 weekly, alot of people has benefited from this investment offer before and during this convid-19 virus, if you passing through financial difficulties due to this coronavirus and you need help paying bills simply choose a suitable investment plan for yourself and start making profit weekly